What is Aggression in Dogs?

Aggression in dogs is often characterized by displays of attempts to harm other pets, humans, or both physically. Although aggression can take multiple forms, seven basic types of aggressive behavior are recognized by dog trainers. They range in severity from mild nuisance behaviors such as growling and barking to serious problem behaviors such as biting and lunging. These different types of aggression may be instinctive and learned (instructed) behaviors.

Dogs can be territorial, and residents of a house or yard may be attacked when entering the dog’s territory. A dog’s territory may be an entire house or a part of it, one room, part of the yard, or any area where he is allowed to roam. Dogs with this type of aggression may bite visitors and snarl at predators who come too close. Owners need to teach their dogs the boundaries and train them to stay within these confines.

This type of aggressive behavior is displayed when a dog feels threatened. Fearful dogs may be bitten or scratched as they seek to protect themselves from the perceived threat. Often, this type of aggression occurs when dogs are not adequately socialized or handled by humans.

Dogs who are possessive of objects or food have this type of aggression. They may growl or bite when their possessions are threatened by another pet, person, or child in the house. You must teach these dogs to submit when another dog or a person challenges them for the bone, toy, food dish, bedding area, etc. Without training, it is easy to set up a power struggle that will escalate into a destructive and dangerous situation for all parties involved.

Dogs who are fearful and nervous may develop this type of aggression. If a dog is introduced to a new person, new pet, or object he has never seen before, he may growl at that person. A dog may also growl when its owner leaves for the day or when no one is home. Fearful dogs have been abused; they have suffered pain and fear and do not trust people as a result.

Dogs who are attacked or threatened may growl, bite, or bark to protect themselves. Sometimes they will try to put distance between themselves and the attacker—dogs with this form of aggression usually pent that an attack is approaching, and they become overly protective.

Dogs who are social and friendly with other dogs may react aggressively towards other dogs when walking or playing together. Dogs who play together can be rough with each other, whether the intent is to hurt or not.

Dogs are aggressive towards people for all different reasons. Some dogs growl, bark, and lunge at strangers as a challenge to a fight. While others attack out of fear or because of their past experiences of being abused or neglected by humans.

Frustrated dogs may attack their owners, children, or other pets. These dogs may bite during training sessions or when asked to complete difficult tasks. Their frustration leads to snapping and growling.

This type of aggression is seen in hunting dogs while they chase, jump up at, and finally kill their prey by biting it repeatedly in the neck area (causing blood loss and death).

This type of aggression is displayed by dogs who engage in mounting behavior (copulating with other dogs, humans, or inanimate objects).

This type of aggression is displayed when dogs growl and fight with other dogs of the same species but different breeds.

This type of aggression is displayed when dogs growl or bite when they are getting petted or rewarded. Dogs may bite while being hugged, tickled, and having their ears cleaned.

This type of aggression is seen in dogs who are anxious and exhibit fearful behavior such as trembling, panting, freezing, cowering, or hiding when not in a safe place.

This is the type of aggression seen in dogs who are fearful and anxious. The dog shows his fear by growling, lunging, or barking at people and animals.

This type of aggression is displayed by dogs who show their fear behavior by body posture such as stiffening, crouching, arching, and showing an open mouth (e.g., snarling).

This type of aggression is seen in dogs who are fearful when left alone or brought out of a safe place and exposed to a new or unknown situation or place. They may display separation anxiety by growling, barking, whining, whimpering, braying, howling, and attempting to hide in a corner.

This type of aggression is seen in dogs who are aggressive towards other dogs or animals they know. This behavior is usually learned out of fear of being killed.

This type of aggression is caused by a traumatic event, such as a car accident, that causes dogs to growl and show violent and fearful behavior toward people, other pets, or even inanimate objects in their environment.

This type of aggression is displayed when dogs bite themselves or others for reasons unknown to their owners.

While dogs can become aggressive for no reason, unprovoked aggression is usually the result of a change in the dog’s environment, resulting in new and different stimuli that cause the dog to be fearful anxious. An example of this could be a puppy removed from his littermates during his first week of life. New people, situations, sounds, and smells could all be reasons why he may suddenly become aggressive.

This type of aggression often occurs in puppies and is sometimes referred to as “jumping up.” It often happens during play and is about how to play. The dog may growl, lunge, or nip at the other dog or person. This can be learned behavior or purely a result of being aggressive during play with other dogs and having been bitten for this behavior.

This type of aggression is seen in dogs who exhibit aggressive behavior toward other dogs of the same sex and size. Aggression is shown by individual dogs who feel that they are no longer “the boss” or feel treated fairly.

This type of aggression occurs when a dog reacts aggressively towards its owner, family members, or strangers because they have seen something they think is prey. Owners need to be aware of what their dogs are reacting to. This will help eliminate the object that threatens their pets.

Dominance aggression directed towards puppies is usually related to the dam’s lack of willingness to allow the puppies to nurse. This may result from the mother being too protective, aggressive or it may be a result of her health or inexperience.

Unprovoked aggressive behavior can occur for various reasons, including lack of early socialization, abuse or neglect (physical or emotional), genetics, and pain. Aggressive behavior should never be encouraged but treated by a professional.

Many aggressive behaviors are innate and may be triggered by environmental factors or learned behaviors.

In dogs, dog aggression is mainly associated with domestication. This is because early dogs were bred for specific purposes (herding, guarding, etc.), which significantly altered the dog’s temperament in different ways based on environment and purpose.

Dog aggression is typically related to past experiences such as abuse or neglect. Aggression may also arise as a result of environmental factors such as lack of socialization.

Dogs do not need to feel threatened or fearful for them to show a strong reaction to people. Aggressive behavior is caused by past events, environmental factors (environmental enrichment), and genetics. It can easily be created from fear and anxiety in dogs through inappropriate interactions with other dogs and the owner’s assumption of behavior that isn’t always there.

The above article is NOT meant to replace advice from your veterinarian or behaviorist. 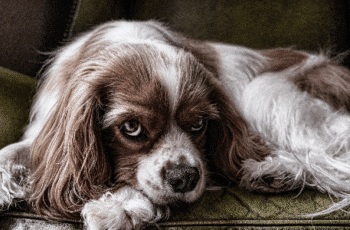 https://youtu.be/K2akigcFWVs Separation anxiety in dogs is defined as any excessive …