Home
Dogs How To
Dogs Amazing Sense of Smell

Dogs are some of the most incredible animals on earth, with a plethora of abilities. They can sniff out bombs, detect Parkinson’s Disease, and even warn owners of epileptic seizures before they happen. They’re truly a man’s best friend.

These fantastic abilities are because dogs are mammals and have an excellent sense of smell. Dogs can smell more than a trillion odors, which is 10,000 times better than humans can. This is because of the large amount of sniffing they do, which allows their brains to process the smells they take in naturally. Humans have about 5 million scent receptors in their noses, but dogs have 200 million hairs that act as a sort of nose. This is connected to the brain’s limbic system, enabling them to process all these different smells and tell what scents they are. 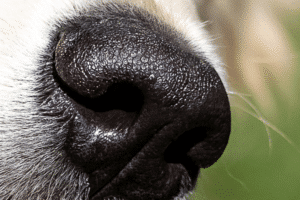 The smell is transmitted from a chemical in the air into olfactory receptors in a dog’s nose. These trigger electrical impulses that fire through the brain’s smell center and stimulate and activate parts of their minds as they take in these different smells. This is believed to trigger the scent memory, which encodes the scent and is made from receptors in dogs’ brains. This can be recalled when a dog smells it again.
This is demonstrated by an experiment where dogs were shown to remember the smell of a human they met only once six months prior.

In 2000, scientists discovered a gene responsible for how good a dog’s sense of smell is. Dogs who have this gene can smell things that humans cannot pick out, making them some of the best sniffers around. However, as this gene can be found in 40% of all dogs, it does not explain why some dogs can sniff out bombs and the like, and others aren’t. This suggests that while genetics plays a huge part in the abilities dogs develop through evolution, there are other factors. 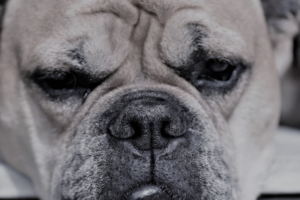 Dogs’ noses contain more than 300 million olfactory receptors than humans, who have around 6 million. This enables them to detect different scents and smells that a human nose cannot see without coming closer to the smell. A dogs’ nose works because when they take in a deep breaths, this air contains many different molecules that they inhale, which triggers nerves in their noses and fires electrical impulses through their brains, which stimulates the brain’s smell center. This then encodes the smell and is stored in the memory.

Dogs also have a series of receptors in their nasal cavity, which allows them to determine whether that scent is familiar or not. They can then tell whether they will choose to follow that scent and do this even when hundreds of scents are around. 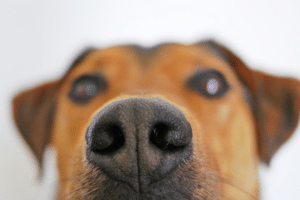 Dogs have a perfect sense of smell which helps them to navigate through their environment. They use their sense of smell to interact with those around them, and the scents they can detect gives them a tremendous amount of information. The sense of smell is used in dogs’ everyday life to help them decide if something or someone around them is there for a good reason. A dog’s sense of smell is also used in training and playing to learn about the world around them.

Dogs can detect many different chemicals and scents that humans have designed. These smells can be found in things such as explosives, drugs, and food that has been hidden to keep dogs from getting it. The scientific name for this is anosmia, which means they were born without a sense of smell.

This ability to detect disease in this way is unique among animals, leading to some exciting applications. Dogs have been used by police departments such as the Los Angeles Police Department, which uses dogs during their investigations.

Dogs are proven to have numerous benefits for seniors, both … 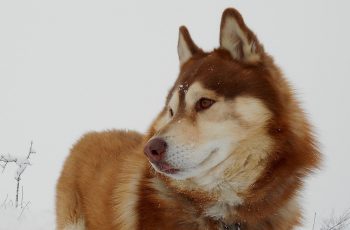