Michael Pascale was doing his usual rounds when he saw something at the nearby park. He rushed to the scene and saw a black Pitbull chained to the fence while looking helpless. He knew he needed to do something, and a plan became action.

Michael worked at the New York Police Department. He was driving the squad car when he stopped to look at the poor dog. He noticed all the trash around him and how the dog stared at him with sad eyes.

There was no way that he was leaving the dog behind. He did his best to break off the chain and rushed him over to the Brooklyn Animal Care Center.

As they waited for someone to give them attention, the dog leaned into Michael while he was drying him off. They were bonding, and the dog looked a lot more comfortable.

It was hard to believe that someone could be so heartless and just leave an innocent dog chained up. Michael texted his wife a photo of the dog, and she immediately responded by telling him to bring the dog home.

The center said that there was a mandatory seventy two hour hold on all rescues. The Pitbull started crying when Michael was about to leave, but he reassured him that he would come back.

On the third day, Michael went to the center on his lunch break. They allowed him to take the dog out for a walk, and they had such a fun time together.

When the day came that the Pitbull was allowed to be released, Michael waited for him outside with open arms. The dog licked his face as he ran around in genuine joy.

Michael named the dog Joey and brought him home. The Pitbull met Joey’s wife, and the two immediately hung out and got close.

Even though Pitbulls were seen in a bad light, Michael knew that it takes patience and love to train them. He got so lucky with Joey and was glad he was there to save him.

Watch the heartwarming video below: 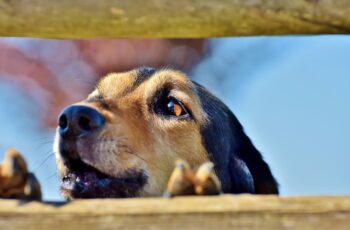 Has the thought of changing your name ever crossed your …