This tiny pit bull puppy named Goosie has all the right reasons to celebrate. When she was born without a nose a year ago, nobody was sure if she would make it not only because of her physical defect but also because of how tiny and fragile she was. But through the help of Sanctuary Rescue and her can-do attitude, Goosie was able to beat the odds, so she deserved nothing but the best to celebrate this milestone.

Dressed in a tutu, Goosie was all excited to welcome her guests to her 1st grand birthday party. She didn’t expect to see around 300 people to turn up for the party, so she felt happy to receive so much love, care, and attention. She enjoyed playing with them, and she’s more than grateful for their well-wishes and support.

Goosie was such a fragile, little pup when she was born. Adri Thrift, the founder of Sanctuary Rescue, thought she would not last long as she had seen her through several hospitalizations, countless doctor’s appointments, and a few close calls. So the rescue decided to celebrate her birthday every week to recognize her small wins.

Weeks quickly turned into months, but this brave little pup didn’t let her defect and small size keep her from enjoying her life to fullest. She continued to persevere until she became better. So when she turned 1, she felt the happiest to achieve such a significant milestone.

Goosie weighs only 11 pounds, while most pit bulls in her age already weigh about 50 pounds. The rescue believes that she might have pituitary dwarfism, so she is likely to be the ‘World’s Tiniest Pit Bull.’

Today, Goosie continues to celebrate life with her loving foster parents. They live on a farm, so Goosie can roam freely and spend her days playing with her bird and geese playmates. Surely, she could not ask for anything more.

Meet Goosie in the video below.

Goosie’s day:Got up early. Ate meatballs. Took a shower. Got blowdried. Took a ride to the TV station. At the TV station she waited in the green room with a lovely little singing quartet? trio? Well, they decided to practice their singing while we waited to go on air. The nice man began to strum his guitar and the ladies started singing the song from Golden Girls and GOOSIE LOST HER MIND! While they sang like angels, Goosie did not like it. She freaked out, expressed her anal glands (all over the Grinch 😂😂) and had to go out in the lobby to calm down. Goosie is NOT a fan of the acoustic guitar. I tried to explain to the singing group not to take it personally, that Goosie was just a weirdo farthead. Goosie made her live news appearance and told everyone about her birthday party (Saturday, May 4, 2019, from 2-4 pm at 1519 Huguenot Road, Midlothian) and then went back to the office where she promptly fell asleep and slept the afternoon away. Eventually it was time to go, but mom had a meeting, so we met dad on his way home from work and Goosie was handed off. She rode the rest of the way home on daddy’s lap. When they arrived home daddy realized he was locked out of the house and took a few minutes to find the spare key. During this time a grasshopper appeared and caught Goosie’s attention. Goosie had never seen a grasshopper before, and it was love at first sight. She then proceeded to chase the grasshopper at full speed, leap off of the porch where she sliced through the air with perfect Superman form, ran the length of the house, turned the corner and disappeared into the woods. She was so fast and focused daddy said she was like a blur. Luckily daddy was able to apprehend The Goose and find the spare key. More meatballs and another nap followed. Then mom got home from her meeting and that was exciting enough to wake The Goose from her slumber. It wasn’t long until nephew puppy convinced her to participate in a game of chase, and not long after that the 95-pound foster brother joined in. 45 minutes later and it’s still complete and utter pandemonium with Goosie leading the charge.

Posted by Sanctuary Rescue on Thursday, May 2, 2019

Source I Love My Dog So Much via Facebook

Many families own pets simply because they love their company. … 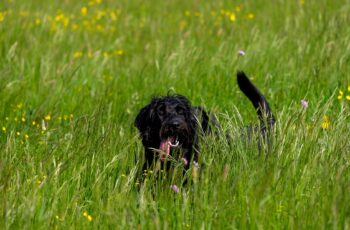 A Romanian animal rescue group called “Howl of a Dog” …